Taking responsibility for my choices–mental, physical, and relational–is the only way to stop playing the blame game. Instead of “S/he (or the Devil) made me do it!” I can simply state the truth, “I made me do it.” It may seem hard to say, but it also will cause the least amount of harm to others and our relationships.

Truth, help me to act like Your daughter, not Your enemy.

So when the woman saw that the tree was good for food, and that it was a delight to the eyes, and that the tree was to be desired to make one wise, she took of its fruit and ate; and she also gave some to her husband, who was with her, and he ate. Then the eyes of both were opened, and they knew that they were naked; and they sewed fig leaves together and made loincloths for themselves.

They heard the sound of God walking in the garden at the time of the evening breeze, and the man and his wife hid themselves from the presence of God among the trees of the garden. But God called to the man, and said to him, “Where are you?” He said, “I heard the sound of you in the garden, and I was afraid, because I was naked; and I hid myself.” God said, “Who told you that you were naked? Have you eaten from the tree of which I commanded you not to eat?” The man said, “The woman whom you gave to be with me, she gave me fruit from the tree, and I ate.” Then God said to the woman, “What is this that you have done?” The woman said, “The serpent tricked me, and I ate.” Genesis 3:6-13 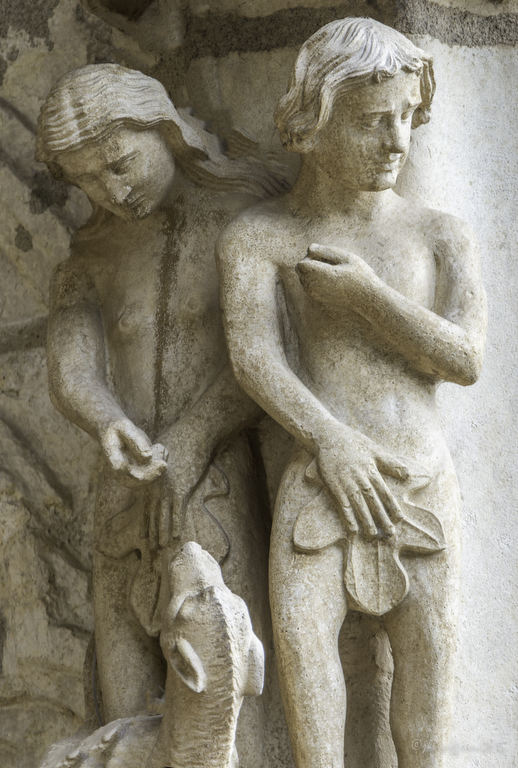 Position your body, hands and head as if you were one of these sculptures.
What prayers are emerging from your heart, mind, and body? Pray them now.

Photos
Eve blaming the serpent and Adam blaming Eve (parts of both hands are broken off)  as depicted by thirteenth century sculptors. The innermost right voussoir of the central bay of the north porch at the Chartres Cathedral in France.

Related posts on the creation sculptures at the Chartres Cathedral